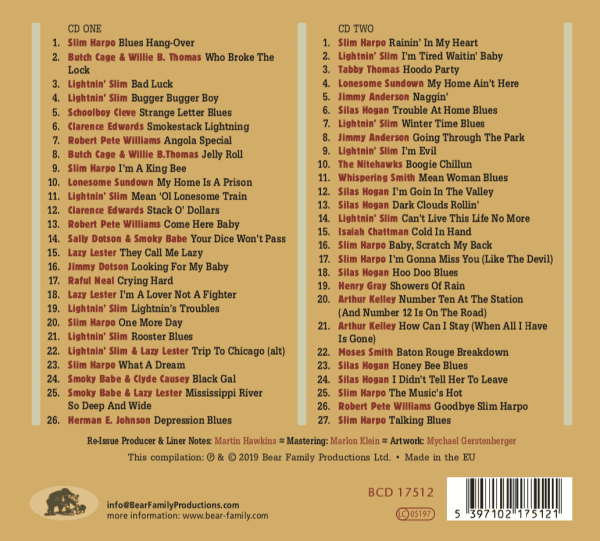 2-CD (Digisleeve) with 52-page booklet, 53 Tracks. Total playing time approx. c. 148 minutes.
•A taster of the blues from Baton Rouge, Louisiana, on two compact discs.
•Like New Orleans, Memphis or St. Louis alongside the Mississippi river, Baton Rouge was a blues hotbed.
From the first commercial recordings made in 1954, the story goes back to 1971.
•For the first time the story of the blues from Baton Rouge is told in all its facets.
•Blues expert Martin Hawkins tells the story of local blues singers and players that got onto records.
•The story goes beyond the Excello sound and the music of Lightnin’ Slim, Slim Harpo, and also features folk music by Willie B. Thomas, Robert Pete Williams and others.
•A detailed introduction to the topic and artist biographies for each individual performer can be found in the extensive 52-page illustrated booklet.
•The recordings have been carefully remastered for this edition.
•Limited edition of 1,000 copies worldwide!
These two CDs contain a more or less chronological taster of the blues from Baton Rouge, one of the several cities alongside the mighty Mississippi that has been thought of or thinks of itself as a blues town. Like New Orleans, Memphis, St. Louis and some smaller places, Baton Rouge’s local blues players made a big contribution to the recorded legacy of the blues. We really don’t know what the blue sound of Baton Rouge was before about 1954, when its first bluesman was recorded, and by the 1970s the blues as current, recorded, black music was dying out, melding with R&B and the sounds of soul. Those newer sounds were still a part of black culture and, increasingly, of white culture locally and internationally, but a different muse, a different music, a different story.

We concentrate on the period between 1954 and 1971, featuring here, together for the first time, those Baton Rouge singers and players who got onto records, one way or another. Some were aspiring professionals aiming for the stars, or at least for a local juke box spin, while others were local ‘folk’ performers plucked from their everyday life to sing for the man with the remote tape machine and a microphone. The blues from Baton Rouge has tended to be seen as synonymous either with the sound of Excello Records, the label that issued the music of Lightnin’ Slim, Slim Harpo and others, or, as the revived, endangered, folk music of the likes of Willie B. Thomas or Robert Pete Williams. Baton Rouge was home to all these men, and many others, during the post-war heyday of the recorded blues.

The first blues singer and guitarist to be recorded was Otis Hicks, Lightning Slim (later spelled Lightnin’ Slim). The man who put Lightning onto records was J. D. Miller, a white songwriter, entrepreneur, and recording engineer based in Crowley, Louisiana. Miller had worked out a deal with Excello Records in Nashville, Tennessee, whereby Miller would make master recordings for Excello to release through their better distribution networks. Lightning Slim introduced James Moore to Miller. Moore became known as Slim Harpo. He was much more of a stylist than Lightning Slim or Lazy Lester, but in the end the man whose music became most identified with the Excello label and with Baton Rouge blues, the ‘swamp-blues.’

In a parallel universe, northern college audiences and folk festival attendees were able to listen to blues players from Baton Rouge on LP discs that were far removed from the jukebox fare of Excello. They were recorded between 1958 and 1961 by Harry Oster and released on his Folk Lyric label.

So sit back and enjoy a chunk of blues history from the deep south of the USA on the Mississippi River, as told by UK blues expert and historian, Martin Hawkins.

HORN FROM THE HEART - THE PAUL BUTTERFIELD STORY - DVD 95 MINUTES

TORONZO CANNON - The Preacher, The Politician Or The Pimp

SAMANTHA FISH - KILL OR BE KIND

Josh Hoyer and Soul Colossal - Do It Now