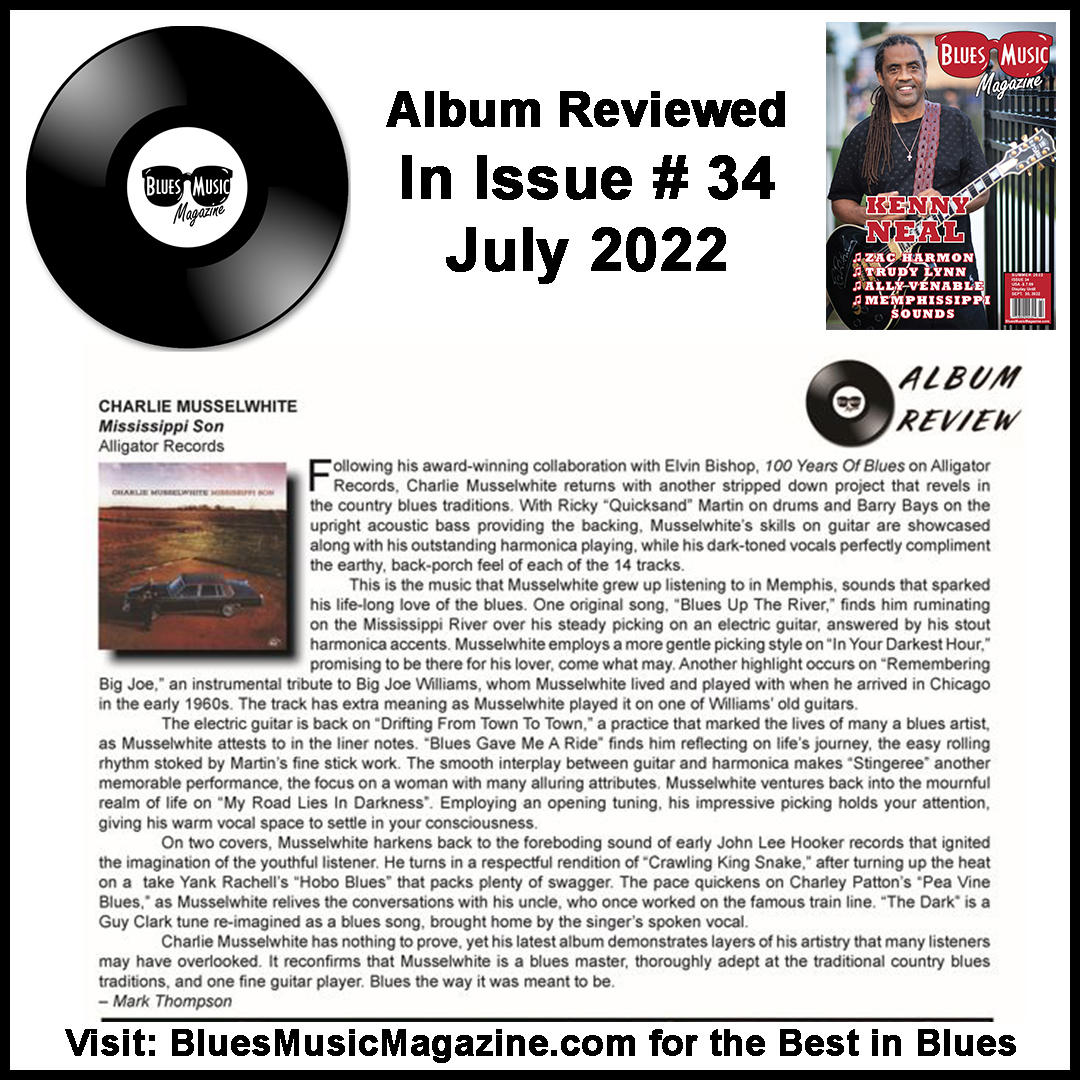 Mississippi-born, Memphis-raised, Grammy Award-winning music legend Charlie Musselwhite will release Mississippi Son, his new Alligator Records CD and LP, on Friday, June 3. On each of Mississippi Son’s 14 songs, including eight powerfully stark originals, Musselwhite’s straight-from-the-soul vocals and deep blues harmonica playing are the perfect foil to his deceptively simple, hypnotic guitar work, which he features on every track. Mississippi Son’s first single, the autobiographical original “Blues Gave Me A Ride,” will be released on Friday, May 6.

Having recently moved back to Mississippi from northern California, Musselwhite recorded Mississippi Son in Clarksdale, right in the heart of the Delta. His honest, soulful vocals, like his every-note-matters harmonica playing and idiosyncratic guitar work, overflow with hard-earned authenticity and lasting emotional intensity. Musselwhite calls his blues, “secular spiritual music,” a sound he’s been perfecting since he, as a young teenager, played his first E7 chord on his Supertone acoustic guitar. Upon hearing and feeling the chord’s blue note, the future blues master thought, “I have to have more of that.”

Charlie Musselwhite doesn’t just sing and play the blues; he is, in every sense of the word, a bluesman. Growing up, he not only learned the music first-hand from many of the genre’s most influential artists, he also absorbed the lifestyle. “It’s an attitude,” Musselwhite says of playing the blues. “A way of living life.” Musselwhite’s life story reads like a classic blues song: born in Mississippi, raised in Memphis and schooled on the South Side of Chicago. A groundbreaking recording artist since the 1960s, Musselwhite has never stopped creating trailblazing music while remaining firmly rooted in the blues.

Over the years, Charlie has released nearly 40 albums on a variety of labels, his exploratory recordings including straight blues but often mixing in elements of jazz, gospel, Tex-Mex, Cuban and other world music. Four of those albums—1990’s Ace Of Harps, 1991’s Signature, 1994’s In My Time, and 2010’s The Well—were released on Alligator Records and remain among his best-selling titles.