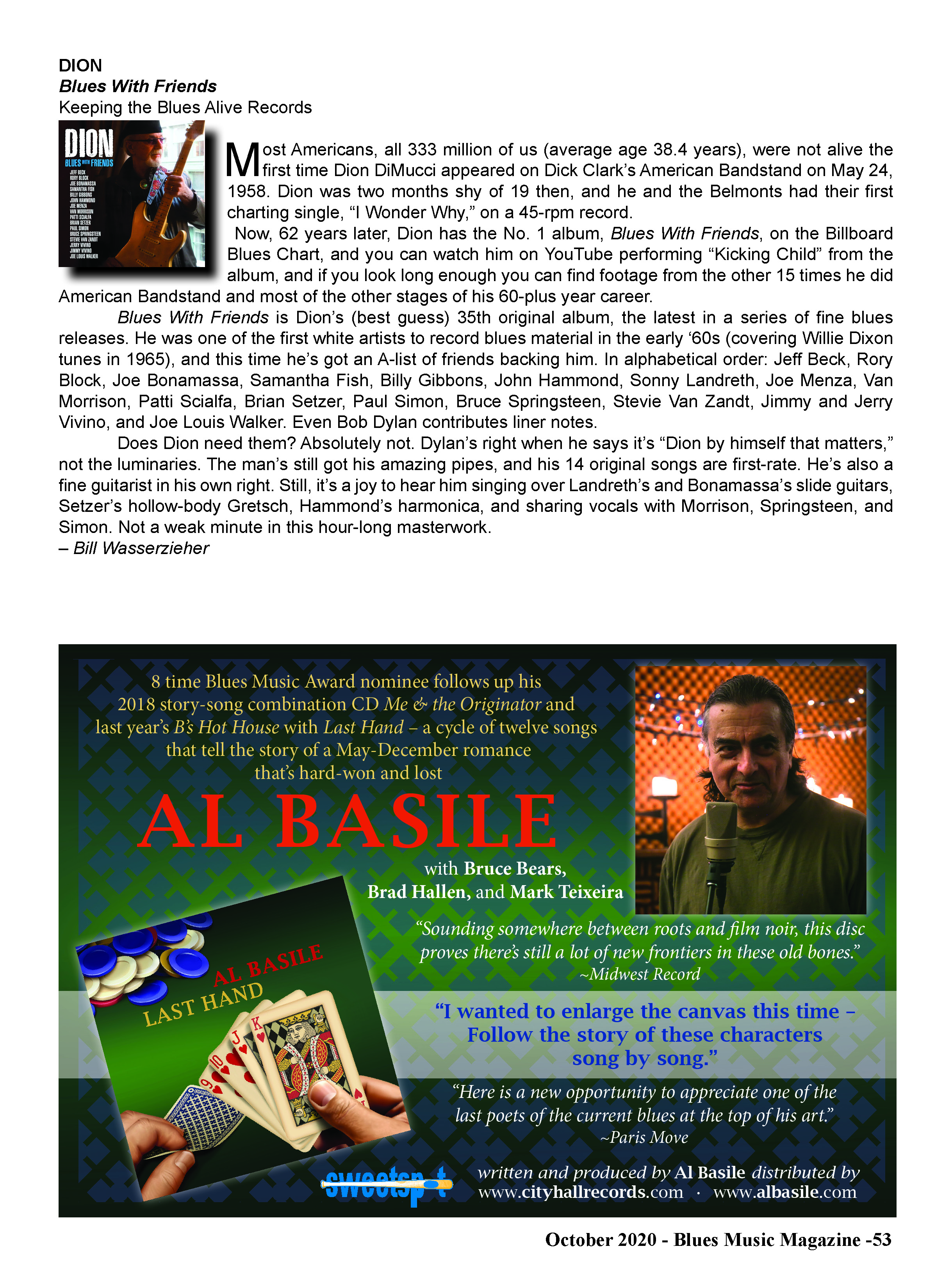 “Dion knows how to sing, and he knows just the right way to craft these songs, these blues songs. He’s got some friends here to help him out, some true luminaries. But in the end, it’s Dion by himself alone, and that masterful voice of his that will keep you returning to share these Blues songs with him.”

Dion’s Blues With Friends, CD out June 5, represents the fulfillment of a lifelong vision. Dion explains the album’s impetus, “I wanted an album of songs that were strong and memorable and told stories that were worth telling.” His songwriting efforts were supported by a cadre of great players, which all jumped at the chance to collaborate with a music legend they each think of in heroic terms. He’s quick to point out just how enduring this creative relationship has been, “The blues have been at the heart of my music since the early 1960s. ‘The Wanderer’ is a twelve-bar blues and I was covering Willie Dixon and Jimmy Reed in my early years at Columbia — much to the dismay of my corporate masters.”  That’s the way it’s long been for the man Lou Reed inducted into the Rock and Roll Hall of Fame more than thirty years ago. That night the normally taciturn Reed exalted, “And then there was Dion — whose voice was unlike any other I had heard before — a voice that stood on its own, remarkable and unmistakably from New York. Bronx soul.”

As one of the very few first-generation rock ‘n’ rollers still seriously pursing new avenues of expression, Dion’s Bronx soul is very much in evidence on this new album, a full-tilt blues offering. The blues songs therein are not “covers” nor Dion’s versions of blues standards. These compositions are in fact original blues masterpieces which are destined to become classics.  He came up with the music and words for twelve of them and finished those with co-writer Mike Aquilina. The two exceptions are “Hymn To Him” which Dion wrote with Bill Tuohy and “Kickin’ Child,” written with Buddy Lucas.

To tell those stories, Dion recruited help from a few notable friends and admirers.  He thought, “I needed to round up the best guitarists and musicians alive and pick them from every generation, every variation of blues.” And that’s just what he did, surrounding himself with those who feel the blues spirit as he does.

The album’s guests include the cream of the contemporary scene’s blues-rooted slingers including Jeff Beck, Billy Gibbons, Joe Bonamassa, Brian Setzer, Sonny Landreth, Samantha Fish, John Hammond Jr., Joe Louis Walker, Rory Block , Jimmy and Jerry Vivino, vintage guitar guru Joe Menza as well as icons Stevie Van Zandt, Patti Scialfa, Bruce Springsteen, Van Morrison and Paul Simon.  Yes, that’s a whole lot of star power but each participated not because of his or her marquee appeal but because of what each could add musically. The result is one reflective of nuanced devotion to the blues rather than a gratuitous display of individual virtuosity. It’s very much Dion’s album and those bold face names participating are most convincingly there for him.

For this outing, Dion worked with producer Wayne Hood in whose Florida studio the basic tracks were recorded. “From the first day, I was at home. We hit it off like brothers on a mission. We caught the same vision and sound and off we went.” Over the course of the last part of 2019 and the first part of 2020, the album began to take shape.  Dion had the songs and the collaborators began to reveal themselves. As Dion tells it, he ran the album’s first track, “Blues Comin’ On,” past Joe Bonamassa. He noted, “It’s funny how a song evolves. For me it usually starts with a few words. In this case it was “If I didn’t know better" I wanted to sing those words, so I wrote a song around them. Joe Bonamassa is a monster and took the song to a whole new level.” Joe would be the first of many of Dion’s Blues With Friends co-conspirators.

Ever the no-nonsense sage, Dion bottom lined just what makes Blues With Friends a project for the ages: “Great songs, great guitarists. What more do you need?” he asks.

Dion’s Blues With Friends will be released on June 5th through Keeping The Blues Alive Records, a new label started by Joe Bonamassa and his manager Roy Weisman and is an offshoot of Keeping The Blues Alive Foundation, Bonamassa’s non-profit that aims to conserve the art of music and the rich culture and history of the blues.  The label’s objective is to provide a platform for musical talent in blues and blues-rock based music and to help encourage the careers of extraordinary musical talent. 10% of all profits from the label will be donated back to the Non-Profit for promoting music education to students and schools in need.