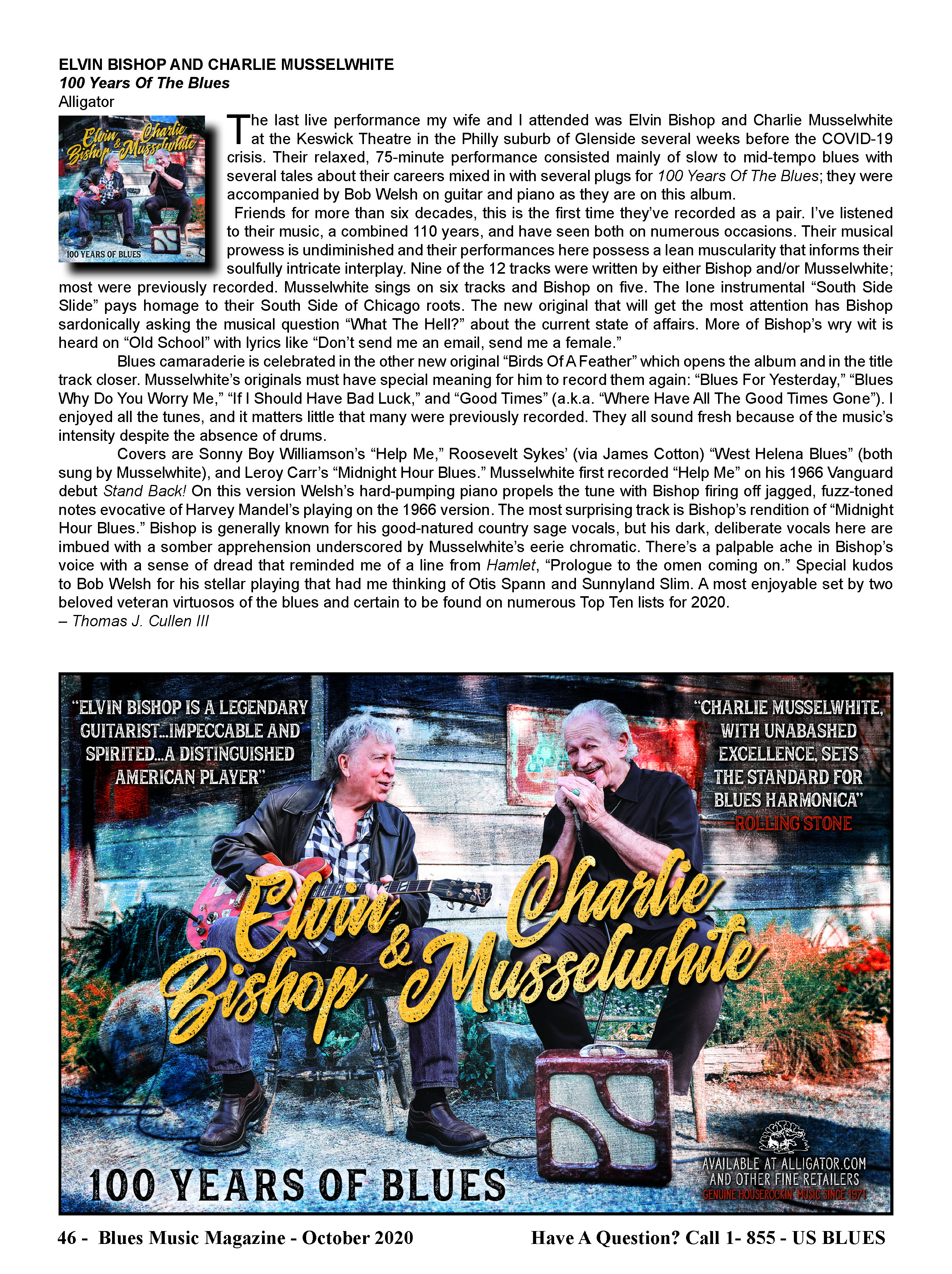 Rock and Roll Hall of Famer Bishop and Grammy-winning harmonica great Musselwhite join forces for a fun and historic collaboration of front porch blues. Among the most famous bluesmen in the world, with over five decades each of recording and performing, Elvin and Charlie have scanned over 600,000 units combined, despite over two dozen of their releases coming before the advent of Soundscan. Aggressive press, radio and social media outreach around the great story of these two legends recording their first album together.

Radio promotion for regular airplay on Triple A and Americana stations, as well as play on blues specialty shows that are guaranteed to give it bountiful spins. Tour dates at theaters and performing arts centers as they become feasible.

The two history-making musicians – both Blues Hall Of Famers – are blues legends with over 100 years of professional musicianship between them. They are among the most famous bluesmen in the world. Although they’ve known each other since the early 1960s and recorded as guests with John Lee Hooker (and other friends), this is the first time that they ever teamed up to make a full record. According to Musselwhite, "This is us sitting down to play the music that we love and resonating together effortlessly because we’re 'coming from the same place'...on many levels."

The idea for the album was sparked in 2017 when the two icons laid down the original version of the song 100 Years Of Blues for Bishop’s Big Fun Trio album. They realized that, with their soul-deep understanding of the blues, they had a special musical chemistry between them. In 2019, Bishop and Musselwhite played a series of stripped-down shows – along with their mutual friend, master pianist/guitarist Bob Welsh – swapping songs and telling stories. The audiences went wild, and Elvin and Charlie had so much fun they knew they had to capture the magic in the studio.

100 Years Of Blues is blues at its deepest, warmest and most engaging. “It all fell together so quickly and easily,” says Bishop. “We each brought about half the songs and recorded them all in one or two takes.” As for his cohorts, Bishop says, “Charlie is the real deal. He didn’t learn his licks off of records; he lived them. He’s always himself. And Bob Welsh is so versatile on guitar and piano. When you play with people who are real good, it ups your game too. I just did the best job I could.” Of Bishop, Musselwhite says, “Elvin is always a joy to play music with. We see things pretty much the same. Musically it’s like fallin’ off a log. It’s so easy and it just makes sense.”

The album was recorded at Kid Andersen’s Greaseland Studios and Bishop’s Hog Heaven Studios in northern California. It was produced by Andersen and co-produced by Bishop, Musselwhite and Welsh. The laid-back, spontaneous nature of 100 Years Of Blues highlights the heartfelt passion of each performance. The richly detailed, autobiographical title track (freshly recorded for this album) tells Elvin’s and Charlie’s tales with sly good humor, recalling specific times and locations in their amazingly colorful lives. The potent What The Hell? finds Bishop taking on current events, winking an eye while speaking truth to power. Throughout the album, the interplay of guitar, vocals, harmonica and piano is virtually telepathic.

Both Bishop and Musselwhite got their start in the early 1960s on Chicago’s blues-rich South Side. Bishop, from Oklahoma, befriended and was taught by guitarist Little Smokey Smothers. Musselwhite, from Memphis, was mentored by his pals Delta bluesman Big Joe Williams and harmonica master Big Walter Horton. Although they were young, white newcomers, Bishop and Musselwhite were accepted by the Black blues fans and by the established musicians because they were, like the bluesmen themselves, “from down home", and also because they played the blues with real feeling. As Musselwhite explains, “It was great the way Elvin and I were not only welcomed but also encouraged by the blues giants of the day. When I first got to Chicago I was content just to hang out and socialize and listen to the great blues, but when Muddy Waters found out I played harmonica, he insisted that I sit in. That changed everything, because other musicians heard me and started offering me gigs. Boy, did that get me focused. I might not’ve ever had a career in music if men like Muddy hadn’t been so welcoming and encouraging.” Young Elvin was also welcomed onto South Side bandstands, gigging with Hound Dog Taylor, Junior Wells and J.T. Brown.

Both men went on to win fame by introducing blues music to the rock and roll audience – Bishop with The Paul Butterfield Blues Band and his own genre-bending Elvin Bishop Group, and Musselwhite with his wide-ranging and influential recordings as leader of his own band. Both performed with and made friends with countless blues giants. They immersed themselves in the blues tradition before blazing their own trails, beginning with their initial recordings. As Bishop and Musselwhite began adventurously expanding the boundaries of the genre, the new audience eagerly went along for the ride. Although they had only occasionally crossed paths in Chicago, by the late 1960s -- after Musselwhite and then Bishop relocated to California -- they began regularly running into each other and became occasional fishing buddies. In the 1980s, they toured Hawaii together. In 2002, they headlined a national tour of performing arts centers, further cementing their friendship.

Since then, Bishop and Musselwhite have continued touring with their own bands and creating critically acclaimed, award-winning music. Their stories – rich as they already are – are still being written, and this album is a new chapter. Their subtle, soulful musicianship and relaxed, conversational vocals fuel every song. Infused with their deep understanding of the blues tradition mixed with the good-time spirit these two old pals stir up, 100 Years Of Blues is one of the finest, most memorable recordings of either artist’s career.