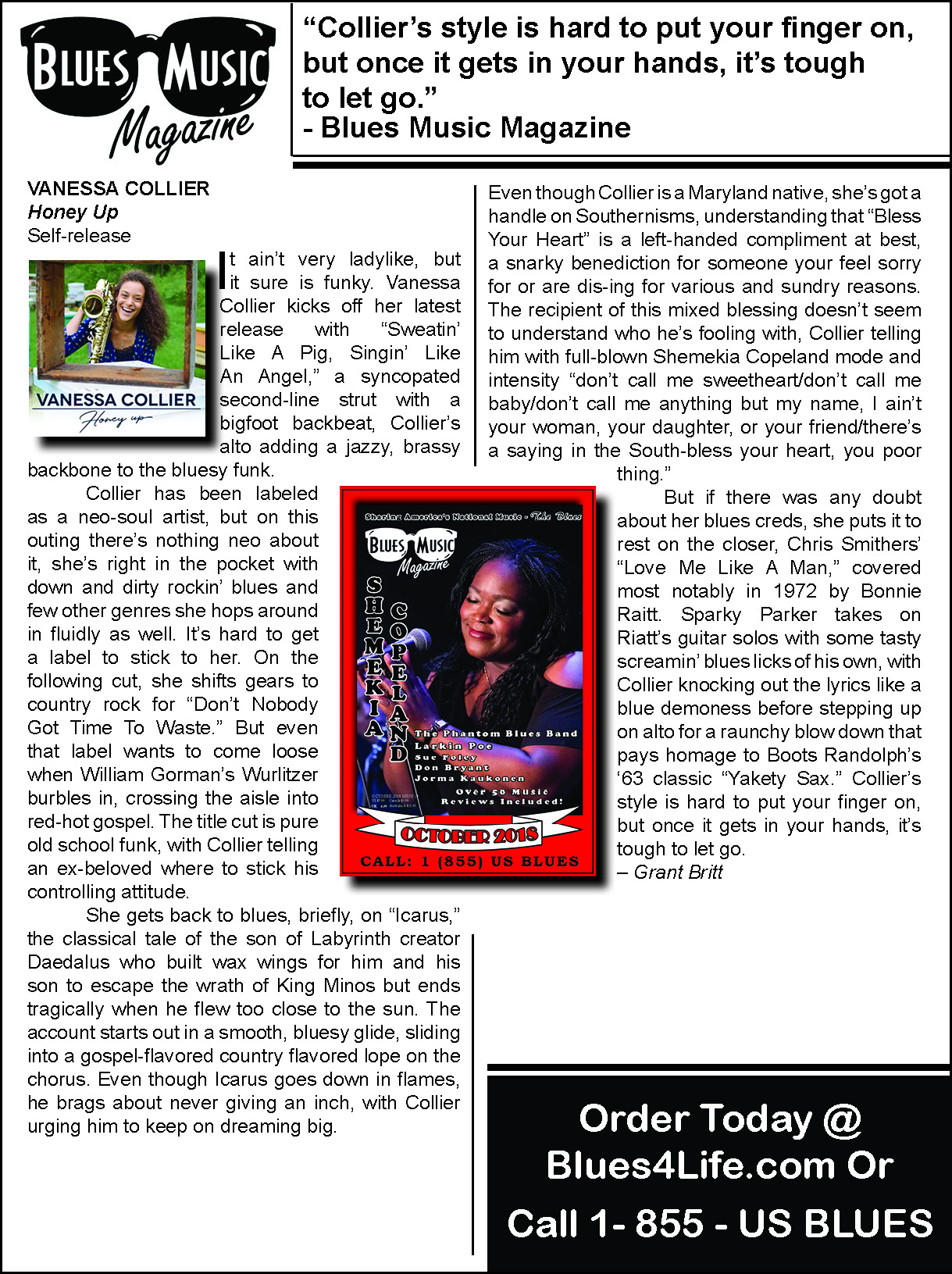 "Still in her twenties, Collier is a fresh face who comes to the blues stage carrying her reed instruments, a dual degree from Berklee College of Music in Boston, a major label debut on Ruf Records, almost two years of touring with Joe Louis Walker, and a mature musical vision."

“There’s a young lady [Vanessa Collier] came onstage with me, I forget where I was, but she’s playing an alto saxophone, and man, she was amazing.” - Buddy Guy

Those are the words of Buddy Guy in a recent issue of American Blues Scene, describing an impromptu performance with Vanessa Collier on the Legendary Rhythm & Blues Cruise. If you haven’t been fortunate enough to meet Vanessa and witness one of her head-turning, fiery, and passionate performances, you should definitely make sure you do. As a master musician and multi-instrumentalist, Vanessa Collier, weaves funk, soul, rock, and blues into every powerful performance and she is downright impressive. With soulful vocals, searing saxophone, and witty songwriting, Vanessa is blazing a trail, racking up an impressive arsenal of honours, and has already singled herself out as an artist of distinction and one we would all do well to watch.

It’s not simply the accolades she has accumulated so far, although they’ve been many -- three Blues Music Award Nominations (BMAs), a Blues Blast Award nomination, the Jammingest Pro Award bestowed by the Legendary Rhythm & Blues Cruise, First Place for lyrics in the International Songwriting Competition, Best of 2014 Blues Breaker on Dan Aykroyd’s BluesMobile -- it’s the fact that she has accumulated all these honours even while her career is still in its infancy. A 2013 graduate of the prestigious Berklee College of Music, she’s toured nationally and internationally, released two critically acclaimed albums (2014’s Heart, Soul & Saxophone and 2017’s Meeting My Shadow), and will release her highly anticipated third album, Honey Up, in July 2018.

It’s not surprising that the press has been quick to commend her efforts as well. Blues Blast Magazine affirms, “Vanessa Collier is a fresh face on the American blues scene, and in addition to her soulful vocals, she brings a mighty sax to the table...” Blues Music Magazine proclaims, “Collier is a fresh face who comes to the blues stage carrying her reed instruments, a dual degree from Berklee College of Music in Boston, a major label debut, almost two years of touring with Joe Louis Walker, and a mature musical vision…Collier commands center stage with her vocals, soloing, and stage presence.” Midwest Record exclaims, “This bluesy singing sax player knows how to bring the slinking funk to her captivating, award winning sound that has echoes in young Bonnie Raitt/Maria Muldaur vocal sounds…Killer stuff on every level, this sounds like one of the reasons you first became a music fan. Killer stuff.” and AXS.Com declares that she “might as well go ahead and add another shelf to her trophy case because clearly, she’s going to need it. With a voice that often recalls that of blues-rock stalwart Bonnie Raitt, Collier turns up the heat...”

Having first picked up the saxophone at the age of nine, Collier embarked on her road to recognition at Berklee, earning dual degrees in Performance and Music Production & Engineering. While still completing her degree, Collier landed a position touring with Joe Louis Walker for a year and a half before Joe encouraged her to strike out on her own. And strike out she did.

These days, Collier spends much of her time on the road, performing at some of the most prestigious music festivals in the world. Her talents have taken her to the Blues Music Awards Show where, in the words of the Blues Foundation, Vanessa “blew the doors off the Blues Music Awards!”; Ottawa Blues Festival, where she earned two front page newspaper photos and rave reviews after her foot stomping debut there; twice on the Legendary Rhythm and Blues Cruise, where she earned the Jammingest Pro Award and was a featured artist with Tommy Castro’s Blues Review; Briggs Farm Festival, where she was the “most popular Briggs Farm act in 2017” (Elmore Magazine), and the list continues. In 2017, Vanessa was also a featured artist in three major tours across Europe as part of Ruf’s 2017 Blues Caravan.

In early 2018, Vanessa was nominated for TWO 2018 Blues Music Awards, the first one for Contemporary Blues Female Artist of the Year, which puts her in elite company with artists such as Beth Hart, Samantha Fish, and Shemekia Copeland, and a second nomination for Instrumental – Horn Player of the Year, in company with veteran artists like Trombone Shorty, Al Basile, and Jimmy Carpenter.

As for Collier, she says she’s happy performing on stages across the world, hoping that she can make a difference with fans and followers along the way. “I am driven to do this because I find it a total form of expression and connection,” she explains. “I love connecting with an audience and feeling their energy and I hope to inspire people to follow their dreams and passions, to find what brings them joy, and then to pursue it doggedly.” Vanessa also takes that message to young people as she runs clinics across the country and is active with Blues in the Schools programs. At a recent Blues in the School program, Vanessa invited a stage full of elementary and middle school aged kids up to dance around her while she performed a blues shuffle. Watching the joy on the faces of Vanessa, the kids, and everyone in the auditorium, it is no wonder why Vanessa has become awe-inspiring to all who meet her. On top of talent and hard work, Vanessa shares an incredible heart and a strong purpose. To borrow from the words of an article in Blues Blast Magazine, “Vanessa is an important part of the future of the blues, and it would be cool to support her journey.

“A young singer with a fierce, compelling voice, she also played a mean saxophone and had the charisma to get the crowd in the palm of her hand for a full hour. ” 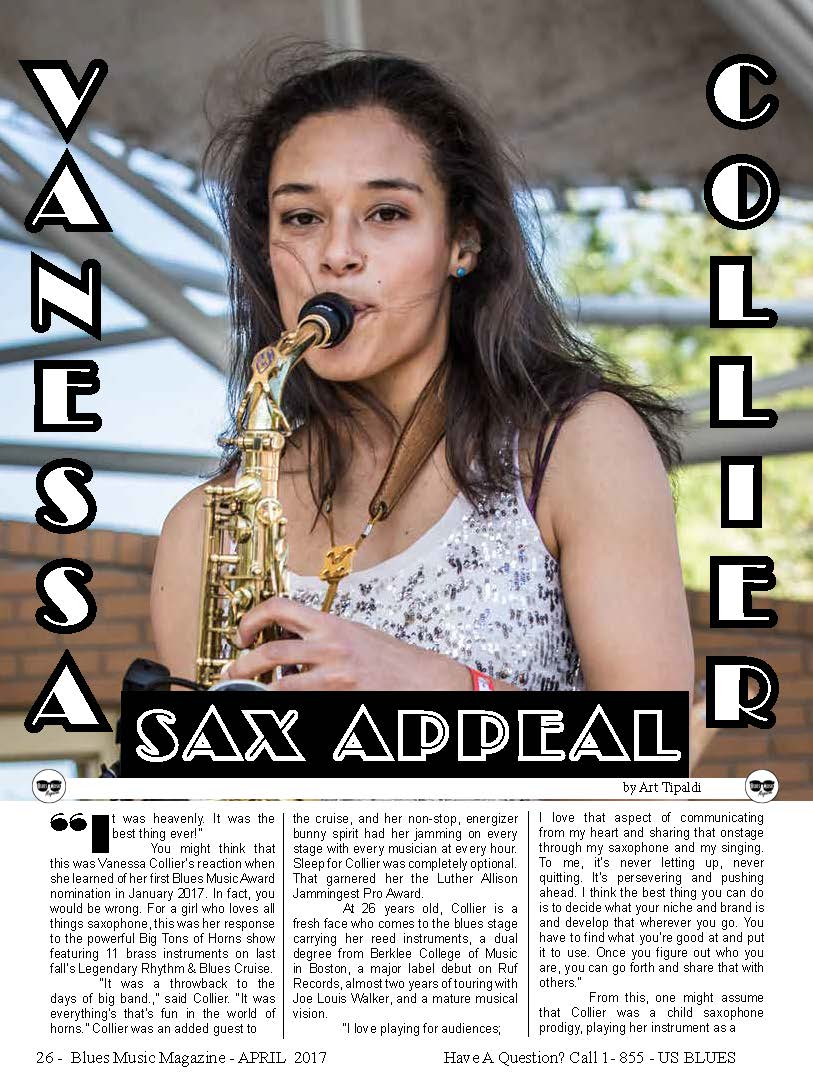 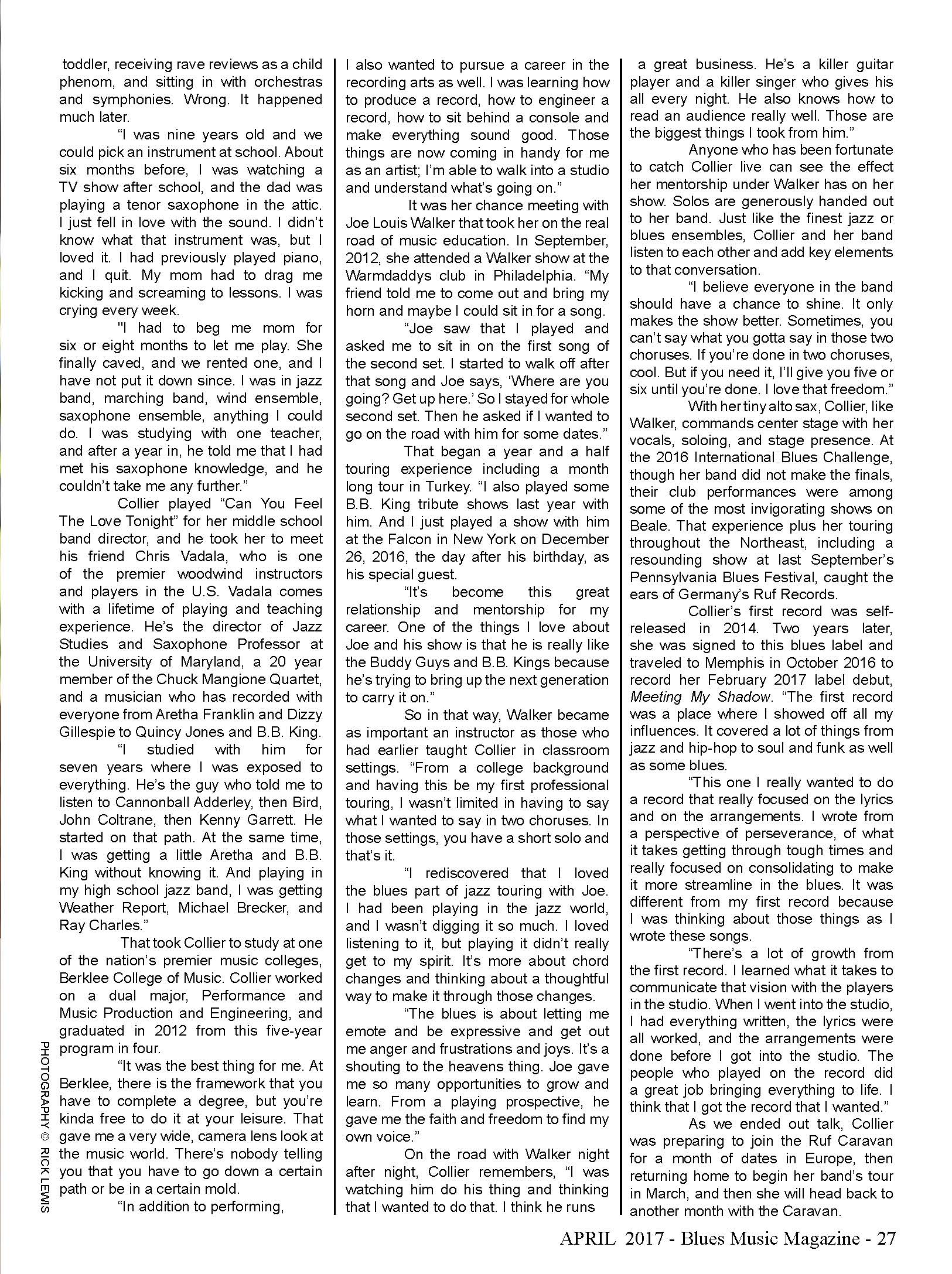